I immediately fell for Jonas Schöley’s European population bubble grid map when I first saw it: 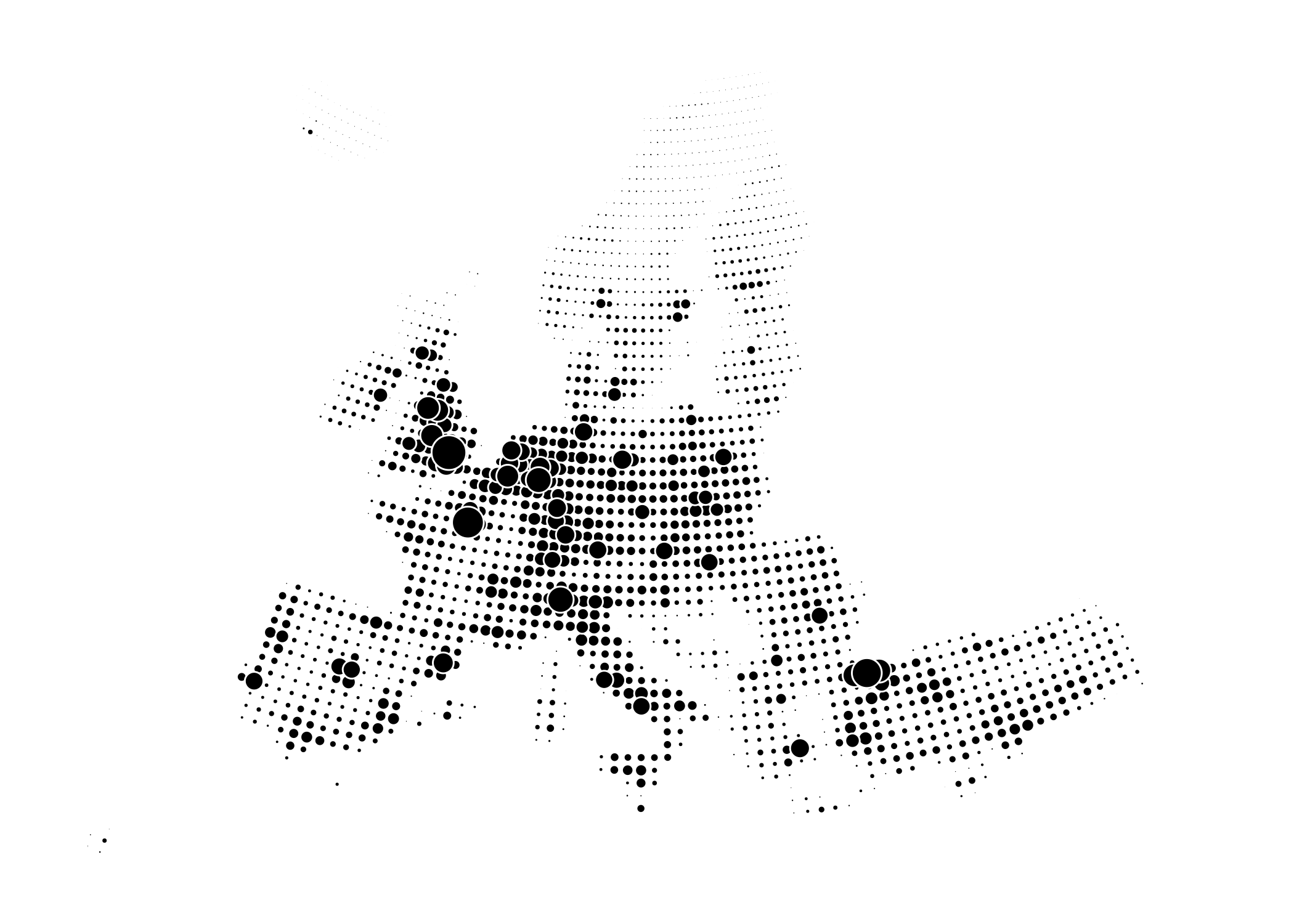 As he describes in his introductory blog post, part of Jonas’ motivation to make this map was to use areas to show magnitude instead of color, like is the case in a standard choropleth. Another advantage of this map type is that it smooths out the effect of sometimes arbitrary and very irregular administrative boundaries. That is why I think bubble grid maps are a very good alternative to choropleths when you want to show a broad overview of the geographical distribution of a variable.

Another motivation for Jonas to make this kind of map was to ‘just mess around with R, the eurostat and sf packages.’ I was just preparing to get my feet wet with the (relatively) new sf package, a package to work with geographical data in R that integrates nicely with the latest version of the visualisation package ggplot2. So this was an excellent opportunity for me to dive in. Luckily, Jonas shared his very well documented R code on his site, so I had a very good starting point.

As I was already messing around with domestic animal data, I decided to visualise the geography of European domestic animal herds. So here are the cows, pigs, sheep, goats and buffaloes of Europe! You can find the R code I used at the bottom of this page.

Cows are quite evenly distributed across Europe (compare their distribution to the much more clustered human population on the map above). You can notice a lack of green dots in the north and center of Europe: those are Norway, Switzerland and the Balkan countries, non-EU countries for which Eurostat (where I took the data from) doesn’t publish any data for. I definitely hope the cows from the UK will not disapear from this map next year too. Also notice how Paris is digging a almost cowless hole into western Europe. 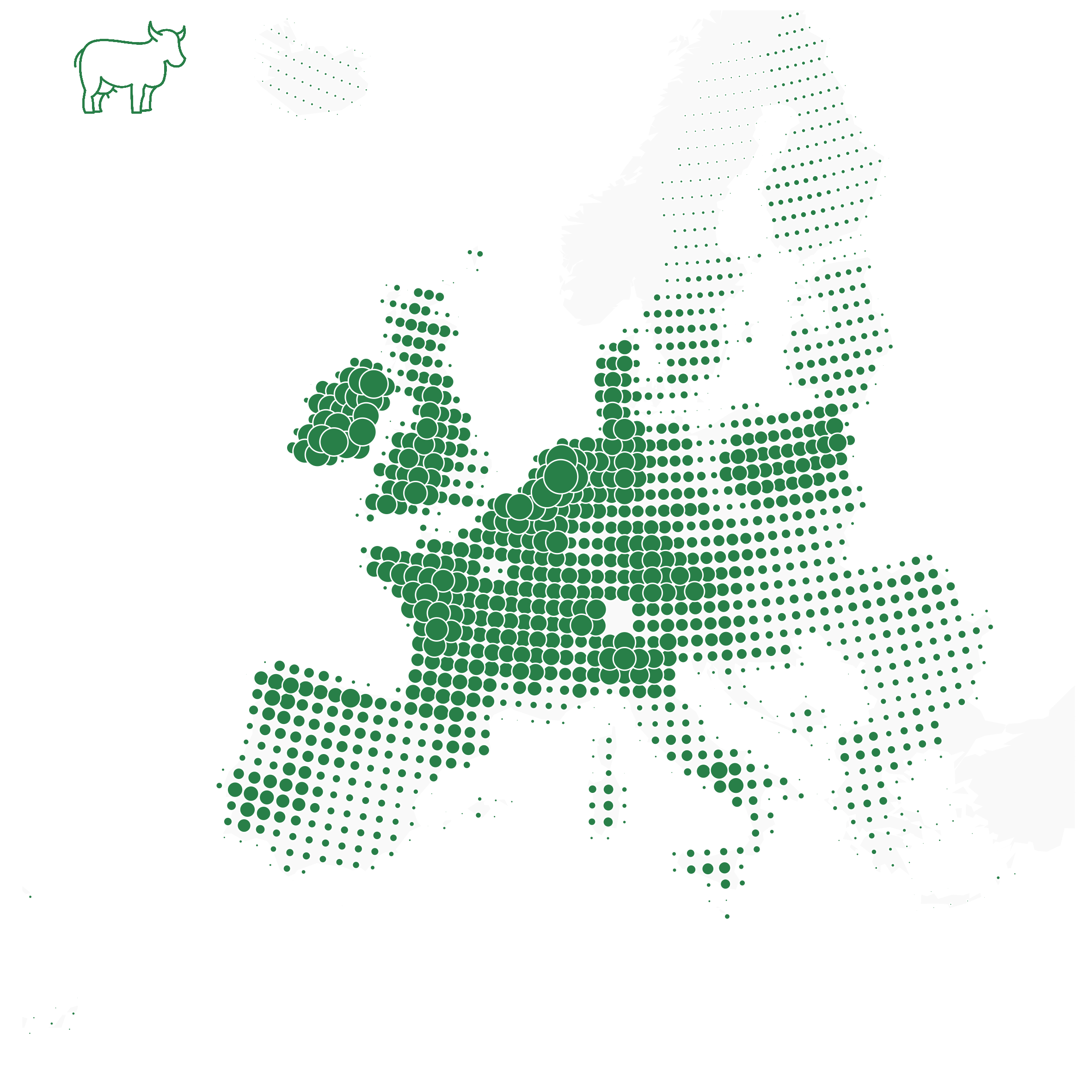 The European distribution of pigs is much more regionally concentrated. Intensive pig breeding is found primarily in Flanders (the northern part of Belgium, where I live), the Netherlands and Denmark. Pig farms there are typically located not too far away from big ports, through which protein rich fodder, like soy beans is imported. This allows pig breeders to raise pigs without having any or much agricultural land: pigs are bred inside and fed with imported fodder. (The problem then becomes having to much manure, no joke)

More intensive pig breeding is also found in northwestern France and Catalonia. You can also see where your jamón and prosciutto are coming from. 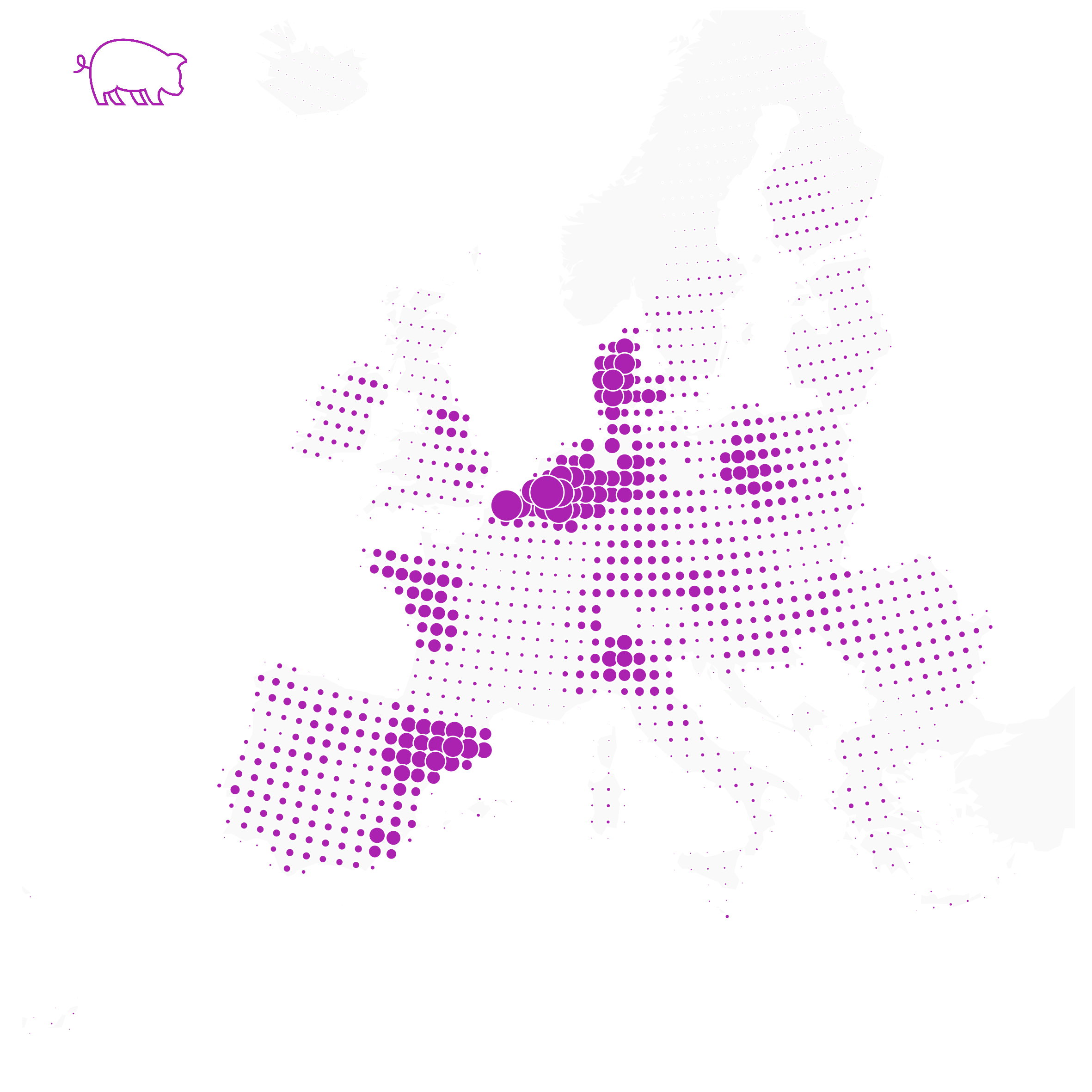 What? Buffalo breeding in Europe? Of course, where do you think your Mozzarella di bufala comes from? 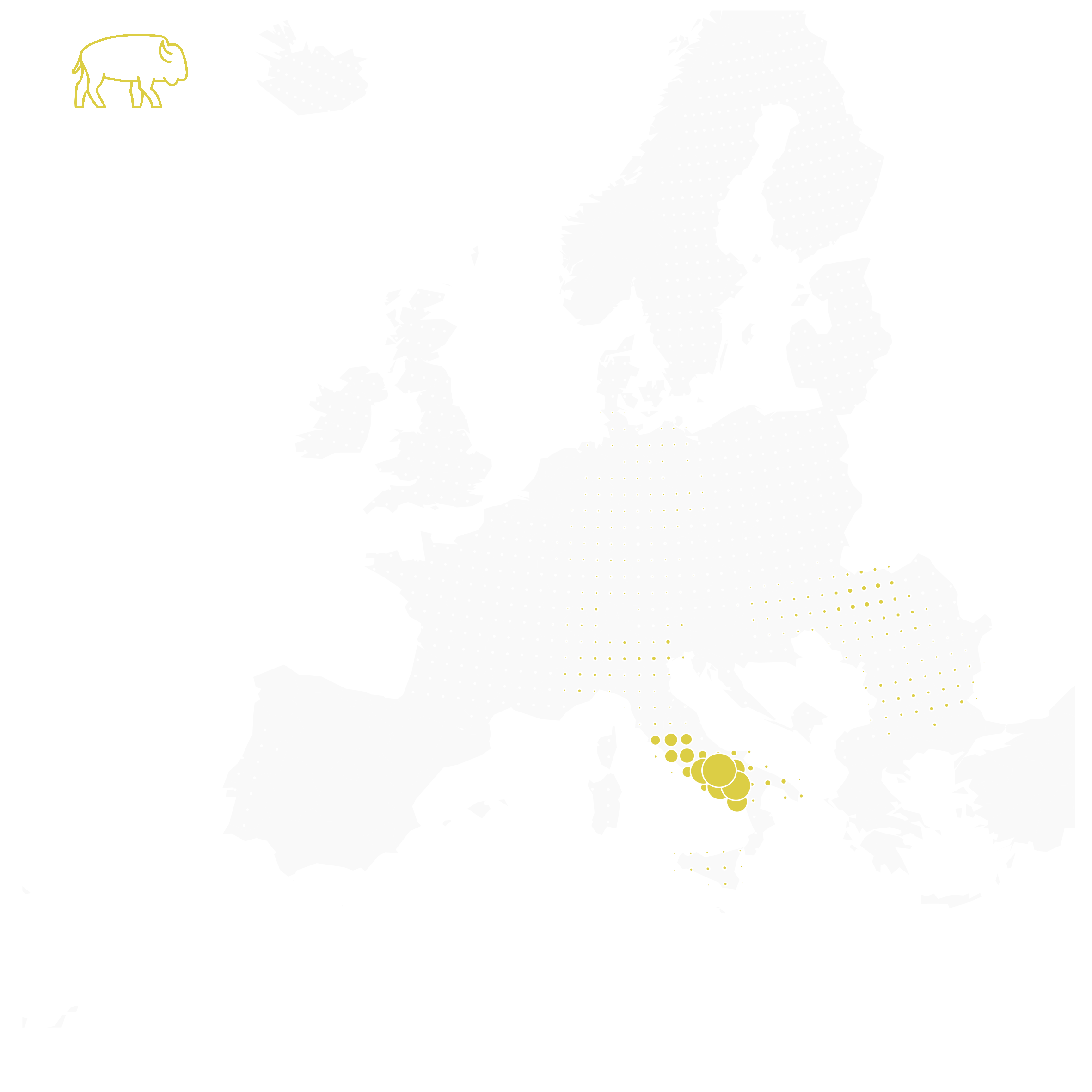 Please notice that the gaps in the data for sheep stretch further then the non-EU countries: sheep data for Poland and Slovenia were also lacking. 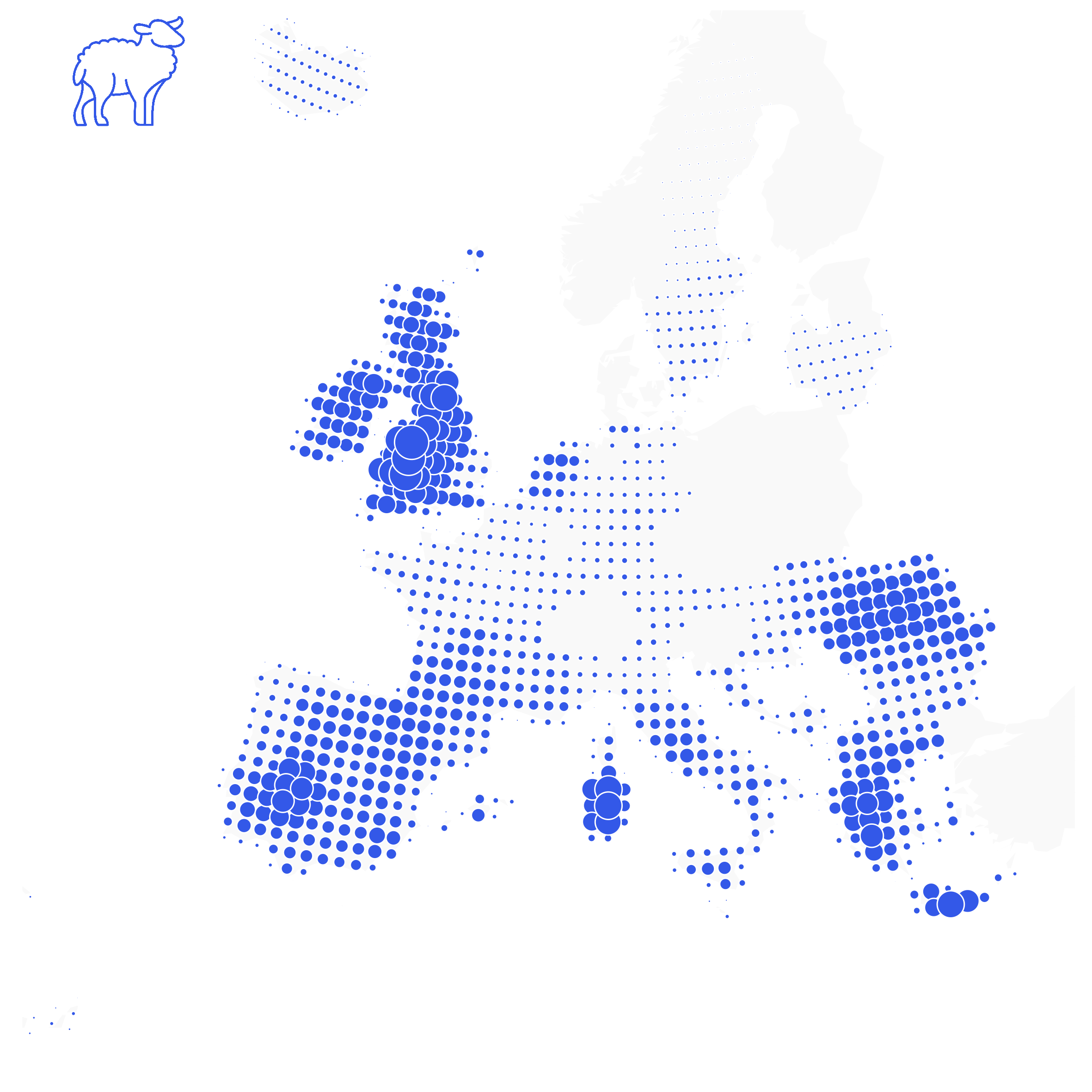 Like sheep, goats are very prevalent in Greece. But goat breeding is also common in southern Spain, western France and the Netherlands. And check how goats make the Canary Islands visible on the map for the first time. 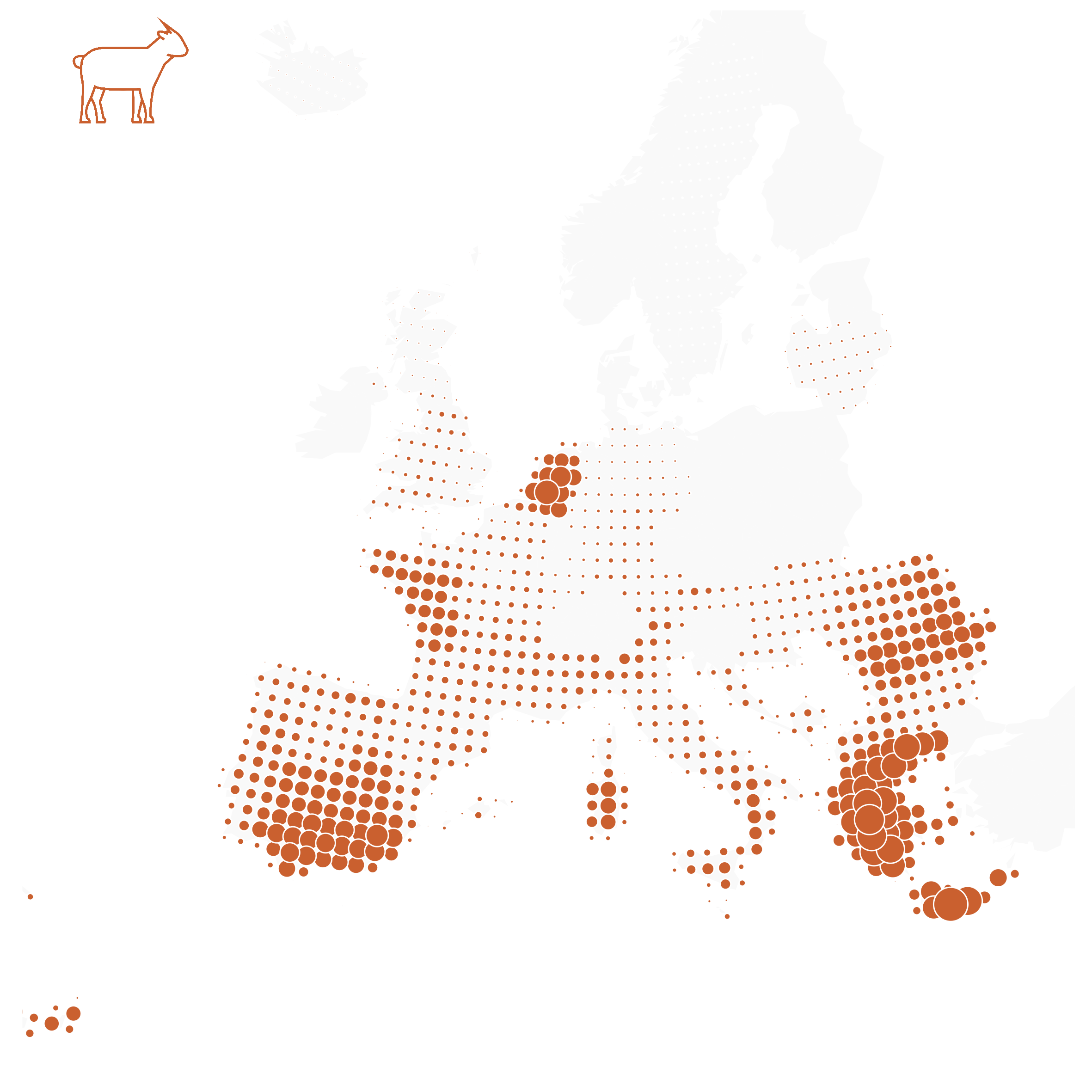 Below, you can find the code to generate these maps. Make sure you have at least version 3 of ggplot2 installed (otherwise geom_sf() will not work). Kudos to Jonas for sharing his code.